A History of Dodge Automobiles

A History of Dodge Automobiles

Dodge is an American brand of automobiles and a division of Stellantis, based in Auburn Hills, Michigan.  Dodge vehicles have historically included performance cars, and for much of its existence Dodge was Chrysler’s mid-priced brand above Plymouth.

Founded as the Dodge Brothers Company machine shop by brothers Horace Elgin Dodge and John Francis Dodge in the early 1900s, Dodge was originally a supplier of parts and assemblies to Detroit-based automakers like Ford.  They began building complete automobiles under the “Dodge Brothers” brand in 1914, predating the founding of Chrysler Corporation.

Dodge mainstay vehicles were trucks and full-sized passenger cars through the 1970s, though it also built compact cars such as the 1963-76 Dart and midsize cars such as the “B-Body” Coronet and Charger from 1965-78.

The 1973 oil embargo caused American “gas guzzler” sales to slump, prompting Chrysler to develop the Dodge Aries K platform compact and mid-size cars for the 1981 model year.  The K platform and its derivatives are credited with reviving Chrysler’s business in the 1980s.  One example was the Dodge Caravan.  During the 1990s, the Dodge Stratus found many buyers along with the larger Dodge Intrepid. 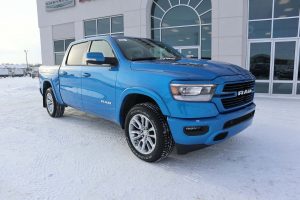 In 2011, Dodge and its sub-brands Dodge Ram and Dodge Viper, were separated.  Ram became a standalone marque.

In 2014, SRT was merged back into Dodge. Later that year, the Chrysler Group was renamed FCA US LLC, coinciding with the merger of Fiat S.p.A. and the Chrysler Group into the corporate structure of Fiat Chrysler Automobiles. Subsequently, another merger occurred on January 16, 2021, between FCA and the PSA Group (Stellantis), making the Dutch-domiciled automaker the second largest in Europe, after Volkswagen.

Locally, South 20 Dodge in Humboldt proudly serves all of Saskatchewan.  Offering new and
used vehicles.  Our commitment to service and quality is second to none.